Last week we ran another successful brainhack workshop at Ryerson University’s Biomedical Zone, as a satellite event for the Canadian Neuroscience Association (CAN-ACN) conference, which was held in Toronto this year.

I’ve written previously about previous Toronto brainhacks and why I like them so much, so I won’t repeat all of that here. But here’s a very brief recap: 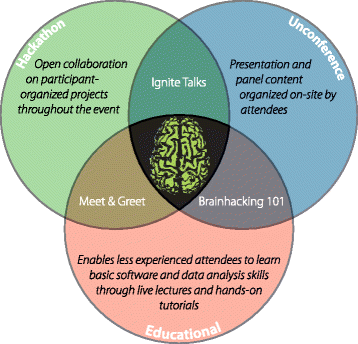 In short, the purpose of brainhacks is to help people collaborate (locally, and also ‘virtually’ with people at other sites) on both new and established projects ( -> ‘hackathon’ ); to learn new technical skills ( -> ‘educational’); and to communicate with people in their field(s), by hearing about people’s research, general questions, miscellaneous interesting ideas, etc. ( -> ‘unconference’ ). Also I would like to highlight perhaps the most important intersection in this figure ( -> ‘meet and greet’).

Last week’s event was our third Toronto Brainhack. As far as we are able to discern the event was a roaring success, with over 80 attendees from all over Canada, and glowing reports all round. Hats off to the BrainhackTO working group, who put several months of moderately hard work into making last week’s workshop happen. As always (well, since the first BrainhackTO in 2016) the charge was led by the working group’s benevolent dictator - breaker of bugs, queen of the container and mother of surfaces, Dr. Erin Dickie. The very strong supporting cast included Gabi Herman, Jerry Jaychandra, Natalie Ford, Chris Hammill, Nathan Chan, Derek Beaton, Michael Joseph, Amanda Aesson, Shreejoy Tripathy, Ben Darwin, and Myself.

The #BrainHackTO organizers are working hard to organize the best educational opportunities (and snacks) for the big day. Sign up now! https://t.co/eldg7Dulut pic.twitter.com/Jpu3tFGeFI

Here’s what we did. The full program is shown on Jerry’s snazzy event website. The workshop opened up with ‘ignite’ talks by Amanpreet Badwhar (McGill) and Paul Pavlidis (UBC). This was followed by project pitches, where around 8 individuals proposed hacking/research projects to work on for the next 2 days.

Jenny Rieck's team applies various norming methods in an interactive Shiny app. They used a practise dataset for now, but intend to use it to explore brain connectivity. #BrainHackTO pic.twitter.com/gkkkHPMset

Within only a short time, Team EEG (led by @neurodidact and @AmandaKEasson) acquired hours of data with a @ChooseMuse headset. Then they started to analyze it! A great learning project at #BrainHackTO pic.twitter.com/9CHiSDisW6

and MRI surface-based analysis for the hippocampus.

To wrap things up, we also gave out two prizes of a muse portable EEG headband, generously donated by InteraXon.

Congratulations @Sridevi292 on your @ChooseMuse headset!!!! Get in touch with our team to claim your prize. pic.twitter.com/rihR49IrTa

As always, the awesome scientific discussions and hack expertise exchanges continued into the late hours with a well-chosen change of location at the splendid Duke’s Refresher bar on Gerrard St.

Huge thanks and congrats again to the rest of the working group for a successful event. Next one is expected to be late fall 2019. If you’d like to learn more and/or get involved, do get in touch!

Previous
Towards standardization of computational models in neuroimaging